What are the after-effects of traumatic brain injury?

As the insurance industry is currently lobbying the government to make the phrase “minor injury” inclusive of concussions and brain injuries, let’s look at the after-effects of traumatic brain injury and see if it is fair to consider it a minor injury.

What is a traumatic brain injury?

Each year, 160,000 Canadians experience a brain injury, according to Physiotherapy Alberta. According to the Centers for Disease Control and Prevention, “A traumatic brain injury (TBI) is caused by a bump, blow or jolt to the head or a penetrating head injury that disrupts the normal function of the brain. Not all blows or jolts to the head result in a TBI. The severity of a TBI may range from “mild,” i.e., a brief change in mental status or consciousness to “severe,” i.e., an extended period of unconsciousness or amnesia after the injury.” This is most often related to a motor vehicle accident, fall, or sports injury.

Contrary to popular belief, both closed and open head injuries can produce a concussion, and there’s no need to go unconscious or to be hit on the head to sustain one. A concussion occurs when the brain hits the skull. For instance, a violent shaking of the head like a whiplash alone can generate a concussion.

A wide range of symptoms

While each concussion is an intensely individual experience with a wide range of symptoms and onsets, the following symptoms are often observed:

Mental health is also affected: as we previously reported, patients with mild TBI were more likely to suffer from PTSD and/or depression.

Simple daily tasks, such as cooking, can become an ordeal after a TBI, as patients face difficulties planning and setting goals and suffer from slowed thinking and understanding.

Concussions happen in a split second but they may take years to heal.

Back in 2016, the Alberta government published the Alberta Brain Injury Initiative Survival Guide, a free and well-thought publication for patients, caregivers, family and friends. This guide covers a wide range of TBI-related topics, from tips to rebuilding skills and a new social life to a list of housing options.

In Edmonton, the Brain Care Centre is an organization operating out of Edmonton and Edson, Alberta. It provides programs and services to adults who have sustained acquired brain injuries, and their support systems. Here at Assiff Law, we are a proud sponsor of this non-profit that has services to help survivors and their caregivers every step of the way.

In 2013, Vinny Gibson’s life changed when a vehicle T-boned her own in an intersection on River Avenue in Cochrane. Today, Gibson is the founder of Sunflower Transitions, which helps people who have suffered a brain injury or concussion (and their caregivers) in the following areas:

Her services are available via Zoom and Skype.

With everything we now know about concussions and their aftermath, it’s clear that traumatic brain injuries often haunt people for life and are anything but “minor”. We hope the Alberta government understands that TBI need time and solid recovery, and their compensation should not be capped at $5k.

We are a Personal Injury Law Firm, located in Edmonton Alberta dedicated and committed to the practice of personal injury litigation.

Mary, our Legal Assistant, is donating her kidney!

Filing a Personal Injury Claim in Alberta: An Overview

How to Recognize the Signs and Symptoms of Traumatic Brain Injury 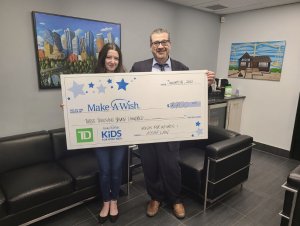